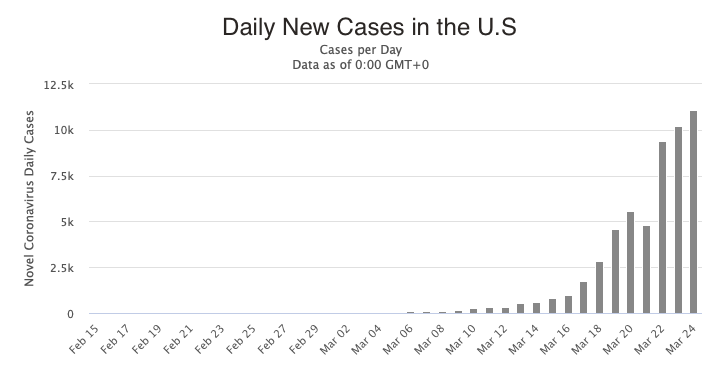 According too the White House, at a Fox News Virtual Town Hall on March 24, the President said:

“I don’t want the cure to be worse than the problem itself — the problem being, obviously, the problem. And you know, you can destroy a country this way, by closing it down, where it literally goes from being the most prosperous — I mean, we had the best economy in the history of our country three weeks ago. And then all of a sudden, we’re supposed to shut it down.” [

I find this troubling. He is saying: Either we save lives, or we save the economy.

But, this is America.

Why can’t we do both. We must to do both, right?

Later in the town hall, he said:

“Well, you have to make the decision. Look, we lose thousands — I brought some numbers here. We lose thousands and thousands of people a year to the flu. We don’t turn the country off — I mean, every year.

Now, when I heard the number — you know we average 37,000 people a year. Can you believe that? And actually, this year we’re having a bad flu season. But we lose thousands of people a year to the flu. We never turn the country off.”

This is immoral, and also incorrect

The economy may recover. The dead will not. Those are our values, right? Life, liberty & the pursuit of happiness. In that order. Got to be alive to exercise any liberty.

More than 29,000,000 Americans may catch it, because we have no immunity or vaccine. So those numbers may be low.

What is the actual death rate?

It varies a lot from country to country:

South Korea has reported 9,137 cases and 126 deaths, a death rate of 1.38%. They achieved this by testing everyone, and isolating the infected.

What should we do?

Please stay home & encourage others to stay home, too.

Don’t listen to the President and Fox News on this one.

This one is life and death.

A previous version asked you to:

Please call your Senators, and demand they protect us. Demand that the government take this seriously, and focus on saving lives.

But, according to The Washington Post’s Coronavirus Updates newsletter, we don’t have to worry, becuase the Governors have the real power.

“A chorus of conservatives is lining up behind Trump’s desire to “re-open the country” by mid-April, despite warnings from health experts that ending social distancing too soon would lead to an overwhelming spike in new cases and deaths. But Trump ultimately won’t be the one who decides that. The 10th Amendment gives governors clear power to protect the health and safety of their residents, no matter the consequence to the economy, and some governors are already expressing skepticism that it would be possible to go back to normal by Easter.”

But you could still call your Senators, and ask why we are aren’t using the Defense Production Act to force companies to produce need supplies, like masks and ventilators. We should have a war time mentality on this.