Trump’s Plan to Steal the Election 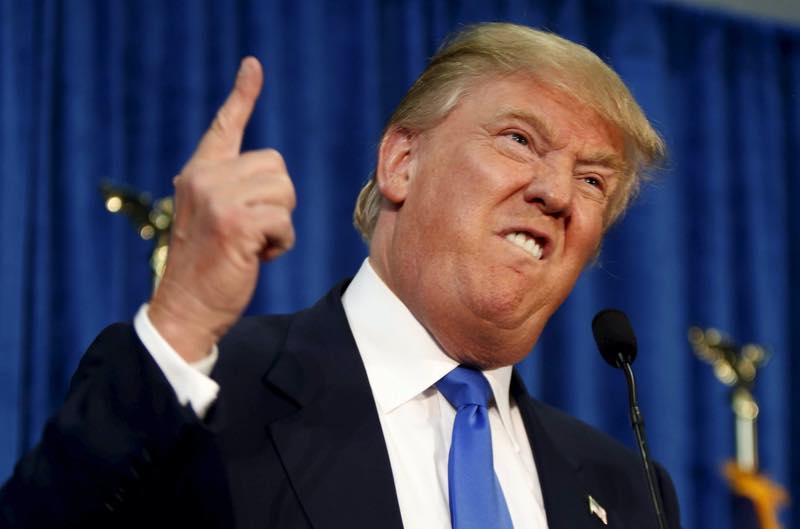 This article in the Atlantic, The Election That Could Break America, crystalized some thoughts I’d been having. Trump seemed obsesssed with mail in voting. What was his game? Initially, I thought he was simply trying to undermine our faith in the election, to excuse a defeat. Just write it off as a “rigged system,” and ride into the sunset. But now, I think he has a plan to steal the election.

Trump has tweeted continuously about vote-by-mail leading to “massive fraud.” There is no evidence supporting this, but he has successfully politicized mail-in voting. 53% of Biden supporters plan to vote by mail. 57% of Trump supporters say they’ll vote in person.

O.K. So this isn’t so much a part of Trump’s plan, but a cornerstone of Republican election strategy for decades.

Just today, Republican Texas Governor Greg Abbott issued a proclamation that limits mail ballot drop-off locations to one per county. Harris County, population 4,092,459, includes the Houston area, and typically votes Democratic. It the most populous county in the state, and third most populous in the county, and now it is limited to a single ballot drop-off location. “We must take extra care to strengthen ballot security protocols throughout the state,” the governor said. Horseshit. This is a cynical attempt to suppress Democratic votes. Texas has strict limits on who can request a mail-in ballot, but the Harris County Clerk Chris Hollins indicated that “hundreds of thousands of seniors and voters with disabilities” had done so.

In the first debate, Trump said “bad things happen in Philadelphia” and he urged his supporters to “go into the polls and watch very carefully.” Earlier that day, Trump campaign staff were blocked by local officials from monitoring newly opened election offices. Philadelphia law requires that poll watchers have a certificate issued by the city, and none have been issued yet, because the city does not consider these offices to be polling places. They allow people to register to vote, and request or return mail-in ballots.

In response, Thea McDonald, a spokeswoman for the Trump campaign, said “Democrats have proven their lack of trustworthiness time and again this election cycle.” Neither McDonald nor Trump provided any evidence of Democratic wrong-doing.

It’s the Republicans who have proven untrustworthy. For 35 years, the Republican National Committee operated under a “consent decree” to limit voter suppression, until it was lifted in 2018. Before the decree, the RNC hired off-duty cops to patrol minority precincts, wearing “National Ballot Security Task Force” armbands, among other tactics designed to intimidate and disenfranchise minority voters. It’s spelled “ballot security” but it’s pronounced “voter suppression.”

What will happen if Trump calls for the “Proud Boys” or some other armed white-nationalist militia to “monitor the polls” in majority Black precincts? Or barring that, maybe order the Justice Department to deploy unmarked troops, as they did in Portland, to “secure the election.” He is trailing Biden, and the election is only a month away. I wouldn’t rule anything out. 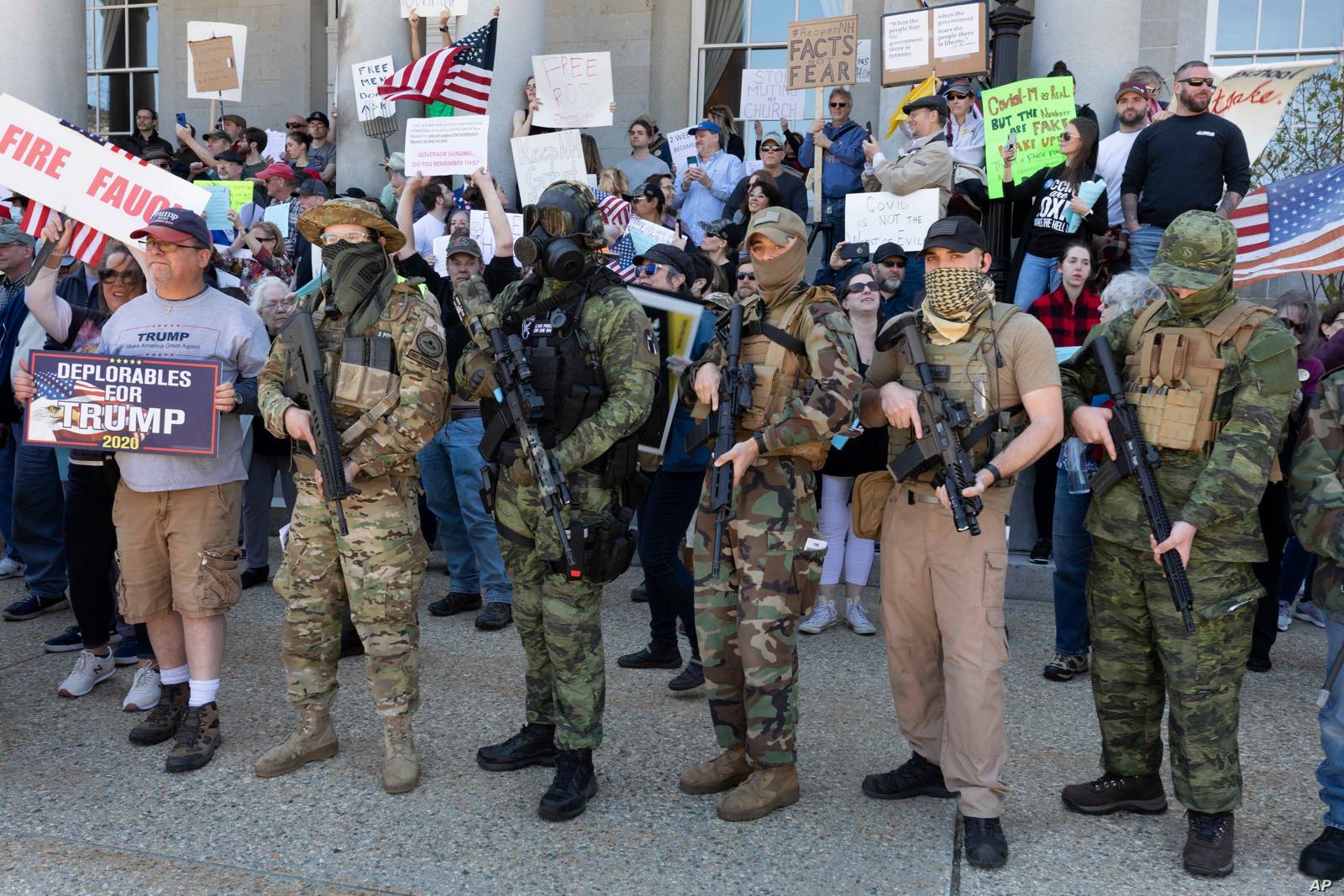 With more Trump supporters voting in person, the President expects to be leading on the night. Many states will have much higher than usual number of mail-ballots to process, and will likely be slow to count them. Some states have laws that prevent them from processing ballots until election day. With more Trump supporters voting in person, and counted in the “normal” way, this increases the odds that Trump will have a lead on election night. Any election day voter suppression will aid this effort.

In any election, some votes are counted after election day. The late-reporting precincts, un­processed absentee votes, and provisional ballots have to be counted. For the last 20 years, votes tallied after election night have tended to favor Democrats.

In 2018, Arizona Republican senate candidate Martha McSally had a narrow lead of 15,403 votes the morning after the election. But the Democrat, Kyrsten Sinema, ended up winning by 71,303 votes after the final tally. That same year, both the senate and governor’s races in Florida were close enough to trigger recounts, recounts that the Republicans would win. While the recount was underway, [Trump tweeted][twt]: 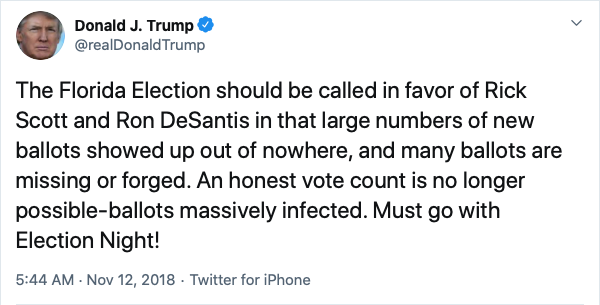 That’s his strategy for 2020. Declare without evidence that legitimate ballots tallied after election night are “new” and “forged,” and try to exclude them.

The Trump campaign sued Pennsylvania in federal court. One of the issues they raised was about “naked ballots”. According to the instructions, a completed ballot should be put in a “secrecy envelope” that has no identifying information, and then into a larger mailing envelope that the voter signs. Naked ballots are those that don’t have the secrecy envelope.

The state Supreme Court in Pennsylvania ruled that these ballots won’t be counted. Nobody knows how many naked ballots will be thrown out, but it could be as high as 5%. All this in a state Trump carried by about 44,000 votes in 2016, less than 1% of the total vote. In previous elections, naked ballots were counted.

Step 6: Take it to the courts

Trump won’t concede. Losers concede. Instead of a peaceful transfer of power, expect a court fight. Expect it to center on mail-in ballots. And expect dirty tricks, because that is his best and maybe only hop of winning.

What are the odds…?

I am just a guy with a blog, so take this with a huge grain of salt, but…

The closest races in the 2020 election are in Arizona, Florida, Georgia, Iowa, North Carolina, Ohio, Pennsylvania, Texas and Wisconsin. These are the races he needs to affect to win.

All of these allow mail-in voting for any registered voter, except for Texas. In Texas, you have to be 65 years-old or older, sick or disabled, out of the county, or in prison to request a mail-in ballot.

Of those nine states, five have Republican Governors and Secretaries of State. (Florida, Georgia, Iowa, Ohio and Texas) The Secretary of State generally runs the elections, and certifies the results. If there are shenanigans that favor Trump, expect it to happen in the Republican controlled states.

The state with the highest likelihood of dirty tricks favoring Trump is Florida, because of course it is. It has 29 electoral college votes, and Republicans are in change of the state and certifying the vote. Ohio is the next most likely, I’d say. The race is tight, and the state is under Republican control.

What to do about this?

This clarified my thinking about how to respond.

“Do you hear the thunder?
It's the sound of strength in numbers.”

If the Republicans think they can steal this election and our civil liberties without a fight, they are in for a surprise. I will exercise my second amendment right to defend “the security of a free State.”

I don’t think I’ll be alone.